To Uber or not? Why car ownership may no longer be a good deal 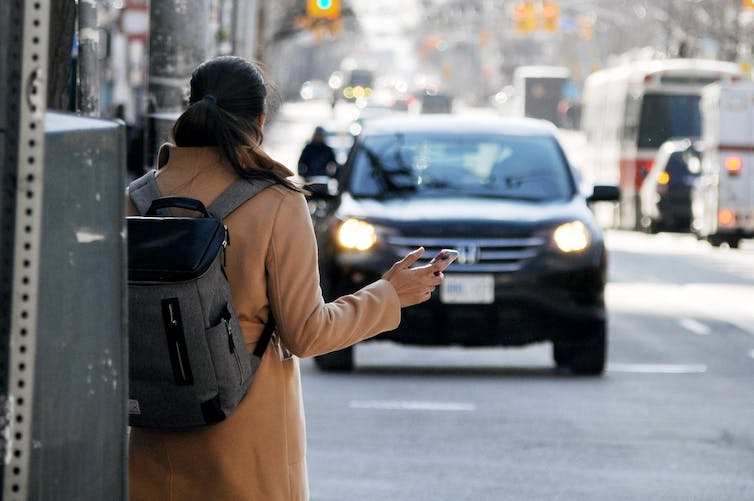 Every day there’s more news about the inevitable arrival of autonomous vehicles. At the same time, more people are using ride-hailing and ride-sharing apps, and the percentage of teens getting their driver’s license continues to decline.

Given these technologies and social changes, it’s worth asking: Should Americans stop owning cars?

We’ve conducted an analysis of the all-in cost of car ownership, and we found that mobility services such as ride-hailing and ride-sharing apps – which few people today would consider their main mode of transportation – will likely provide a compelling economic option for a significant portion of Americans. In fact, if the full cost of ownership is accounted for, we found that potentially one-quarter of the entire U.S. driving population might be better off using ride services versus owning a car.

From dream to brutal reality

America’s love affair with the car and individual car ownership took off after World War II, aided by inexpensive fuel, a rising consumer class and a vast national network of highways. A new generation of young professionals moved away from the urban core to the suburbs and abandoned mass transit for transportation enabled by personal car ownership.

This shift transformed the modern American landscape, triggered a new approach to city planning and enabled urban sprawl. Cities that blossomed before WWII – New York and Boston, for example – already had and continue to use their mass transit systems. By contrast, cities whose growth mostly occurred in a post-war boom like Los Angeles, Atlanta, Houston and Denver were built and effectively designed around car ownership. It’s still typical for an American family to buy a house that has a large garage to store cars.

But for many people, the 1950s concept of driving as an expression of personal liberty has been replaced by the brutal reality that driving is often a tedious chore. With an average price of US$35,000 apiece in the U.S., cars are used about 4 percent of the time, during which drivers are often subjected to congested traffic.

On its face, spending so much money for an appliance that starts losing value immediately, takes up vast amount of our free time and is rarely used seems ridiculous. Is it time to consider a whole new approach to personal transportation?

To answer this question, we built a comprehensive calculator that includes the costs of car ownership and compares it with an alternative of using mobility services, such as ride-hailing and ride-sharing apps, full-time to replace personal car ownership. The results might surprise you.

The costs of traditional car ownership go far beyond the price tag: There is also interest paid on car loans, insurance, taxes, fuel and maintenance. Some expenses are non-obvious, such as parking, property taxes and construction costs for home garages, and the value of our time. 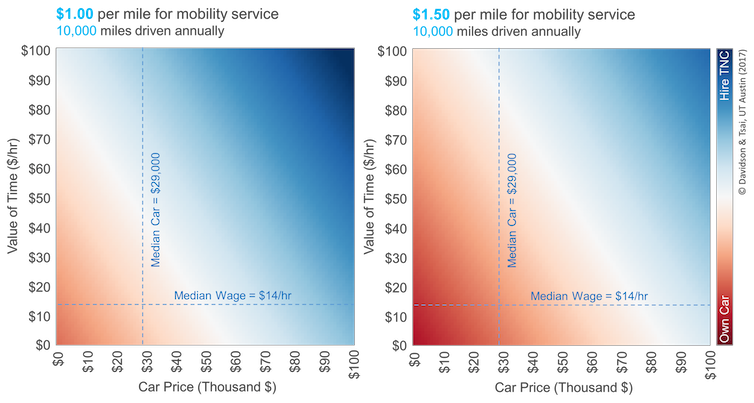 Ride-hailing services become more economic when a person’s car is more expensive and the more that person values his or her time (the blue end of the charts). The cost of transportation services now is usually between $1 per mile (on left) and $1.50 per mile (right), but the introduction of autonomous vehicles has the potential to push prices to below $1 per hour. The intersecting lines represent the results for the median price for a new car and median wages reported to the Social Security Administration. The acronym TNC stands for Transportation Network Company. F. Todd Davidson and Gordon Tsai, CC BY-ND

The value of an individual’s time – that is, the dollars per hour you would assign to the time you spend driving – is one of the most important factors in our calculations.

The average American spends 335 hours annually behind the wheel driving over 13,000 miles. Add in the hours we spend maintaining, cleaning and managing our cars, and it becomes clear that America’s focus on personal car ownership is costing us a significant amount of time, arguably our most precious asset.

How much would you pay to avoid the stress of driving around town? How much would you pay to use that time more efficiently, such as catching up on email, reading a book or taking a nap? What if you could do work-related tasks while riding? Some professions are more suited to using time riding in a productive way: It’s probably easier for a lawyer to clock billable hours while riding to work than a plumber, for example.

When these costs are included, mobility services might be the economically preferable option. To be clear, this analysis is focused on full replacement of personal car ownership in which an individual would shift to using ride services for all trips, rather than purchase a new vehicle.

The decision for owning a vehicle or using mobility services is unique to every individual. If you purchase a highly efficient vehicle for less than $25,000 and drive it more than 15,000 miles per year until it falls apart, then you should definitely own a car if your goal is to save money.

But, if you drive less than 10,000 miles per year, face long waits in traffic, or place a high value on your time that would otherwise be spent driving, our calculations show that mobility services might be the cheaper option. Geography can also play a role – it’s not a coincidence that there have historically been so many taxi cabs in New York City, where the high cost of parking and slow pace of traffic consume time and money.

The rise of autonomous vehicles used for carpooling and ride-sharing services could make mobility services even more compelling, particularly when you consider the economics from the service provider’s perspective.

Assume for a moment that you operate a fleet of vehicles that provide mobility services. Let’s also assume you can purchase the vehicles in bulk for $20,000 apiece and that they will operate full-time for five years (the average age of a New York City taxi was 3.6 years in 2015). The median annual pay for a taxi driver is approximately $25,000. This means that it will cost you $145,000 to purchase the car and pay a driver over five years of operations (ignoring fuel, maintenance, registration and other miscellaneous operating expenses).

Using common accounting practices, we calculated that if you could buy an autonomous vehicle for less than $114,000, a service provider would be better off never hiring a driver.

For the average customer, a price tag of $114,000 is unimaginably high for a car. But, for a company like Uber that might someday operate a fleet of autonomous vehicles, a price tag north of $100,000 might look like gold when compared with paying drivers, a major contributor to operating cost.

As the price for autonomous vehicles goes down, the cost of delivering ride services goes lower. That means more consumers are more likely to use them, expanding the overall market.

Uber, Alphabet and many of the automotive companies understand this. It’s one of many reasons why there is an epic race to capture market share and eventually be the first to deliver fully autonomous vehicles.

On the other hand, if the price of autonomous vehicles falls far enough, maybe individuals will buy their own and recapture the time they currently spend driving themselves, obviating some of the value of mobility services.

But, another question remains: Do Americans really want to give up their cars? Even if mobility services with carpooling and automation are a less expensive choice, the service might still not be adopted quickly since people purchase cars for many reasons beyond simply price (for example, they buy cars for convenience, status, fun, identity and so forth).

For many decades, the car has been a critical part of the American culture, often used as a tool to flaunt wealth and showcase the unique personalities of the drivers. Will Americans want to ride in cookie-cutter cars that are part of a larger automated fleet? Will they trade off the idea of car ownership as an extension of identity to gain back some of their free time?

Some trends do appear to be working in favor of increased use of mobility services. As the United States, and the world more broadly, continues to adopt ever greater levels of digital communication, more people will be able to complete work while on the go. And, the movement toward cities during the past decades has resulted in denser urban centers, increasing traffic congestion and making the case for alternatives to traditional car ownership.

Even changes in how different generations consume goods and services might be playing a role. Millennials have shown tepid interest in following in the footsteps of prior generations when it comes to car ownership. It will be interesting to observe whether Generation Y shows more desire for cars as they begin to enter parenthood and push toward suburbs in pursuit of affordable housing.

How the transition will play out is still unclear. If we were to postulate, it seems the most likely outcome is that the future transportation system will be a mix of personal car ownership and mobility services, using both systems as complementary. If more people use carpooling services in particular, these complementary systems of personal car ownership, mobility services and public transportation might make our roads and cities cleaner, faster and more affordable.

In addition to common mobility services today, Uber and Lyft might soon be joined in force by microtransit operators, like Ford’s Chariot shuttle service.

As mobility services become more mature, we will likely see new solutions emerge to make it even more convenient to meet specific needs, such as transporting youths, the elderly or disabled people, and even assist in disaster recovery efforts. The increased level of service could create a virtuous cycle that reinforces the value of mobility services, producing greater adoption, which further lowers costs and leads to even greater adoption. When it’s all said and done, the ease and economic benefits mean that the transition to mobility services might take place faster than we think.

Researcher Zhenhong Lin, Ph.D., from the Oak Ridge National Laboratory contributed to the research in this article. Gordon Tsai of the University of Texas also contributed.

This article was originally published on The Conversation. Read the original article.