Electronic Work Diaries To Boost Telematics Use in the RFT Industry

The recent passing of the Heavy Vehicle National Law Amendment Bill 2015 means heavy vehicle drivers and operators are a step closer to being able to replace their onerous written work diaries with electronic work diaries (EWDs). The implementation of EWDs will be voluntary, but to understand the potential impact on take up of telematics systems, we have explored how road freight transport companies would respond if EWDs were mandatory.

The Australian road freight transport industry represents a significant growth opportunity for telematics providers – as the recent passing of the Heavy Vehicle National Law Amendment Bill 2015 could generate an uptake in the installation and use of EWDs. The National Heavy Vehicle Regulator notes that EWDs will provide a reduction in paperwork and deliver a much-needed boost in productivity to the heavy vehicle industry and those industries that they support. The National Transport Commission agrees that EWDs will assist heavy vehicle drivers meet the existing requirements that set the maximum number of hours drivers are able to work, as well as making it much easier to comply with the law and stay safe on the road by sending drivers alerts when breaks are required. In addition, the laws ensure drivers who choose to use an EWD will not be fined for small breaches of less than eight minutes. The Australia Trucking Association has also confirmed its support for EWDs and noted that their operational pilot of EWDs found that a 9% take-up of EWDs could deliver more than $200 million in savings in net present value terms to operators, EWD system managers and authorities over five years  –  as operators will be able to enforce fatigue provisions more efficiently and with greater confidence in the data. Thus, the benefits of the EWDs are measurable and real for both the driver and the back-office.

Recent data from ACA Research reveal that only 40% of Australian road freight transport companies have a telematics system fitted in their fleets, with a further 52% indicating that they had no plans to install EWDs. However, if EWDs were to become mandatory, this could lead to a 20% uplift in installation of fleet telematics systems. While the recent legislative changes facilitate the use of EWDs on a voluntary basis, there is little doubt that EWDs will be a significant driver of growth in the future uptake of the telematics industry. Telematics is part of a broader shift towards a higher level of automation across the road freight transport industry. This encompasses all aspects of the industry from warehousing, to distribution, to back office systems, to vehicles and to the management of the infrastructure. The technology, which underpins this increasing level of automation, is developing at an exponential rate and is already being either trialled or used by Australian businesses. For example, driverless trucks have been operating in some mine sites for some time now. The evidence suggests a tipping point has been reached and the changes that are taking place in the industry are only likely to happen at a faster pace. For some fleets change will be driven by core business needs such as reducing operating costs, and for others change will be a matter of necessity such as compliance with new legislation.

We anticipate the road transport industry of the future will become highly automated but the pace at which that future materialises will be determined by the capacity of organisations to realise the commercial benefits that automation offers rather than by the limitations of the technology.

To learn more about the impact of technology - and specifically telematics - in the road freight transport industry, click below to access your complimentary snapshot to ACA's recent research report. 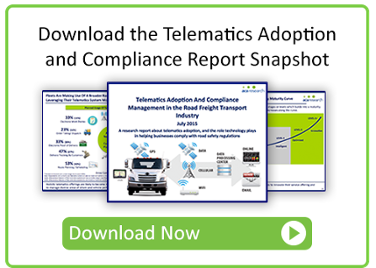