With the arrival of 2015, and an eventful year behind us, it is time to review the recently released VFACTS sales data for 2014. This summary provides an overview of last year’s trends within the automotive industries and comments on possible developments for the months ahead.

In 2014, the Australian market recovered from a slow start, finishing only 2% lower than 2013. Private, rental and Government fleet sales held up well, but the main fall was in the business fleet sector, which ended the year down 6.6%.

Growth has been steady within the small passenger car segment, which is the largest category in the market recording 260,820 sales. Both the medium and large passenger car segments took a hit, with declines of 8.7% and 9.4% respectively. The sales of people movers increased by 10.6%. The small, medium and large SUV segments all recorded increases.  Small SUV sales experienced a boost of 16.5%, medium SUV sales increased by 4.8% and the sales of larges SUVs went up by 1%. Only the upper large SUVs slowed down by 5%. It’s the compact SUV segment, where competition is particularly fierce with a number of new models being released over the last 18 months.

The VFACTS report reveals that new vehicle sales in 2014 decreased in all states but one. In NSW sales increased by 1.5% with 356,174 sales recorded, while other states’ sales dropped between 1.5% (VIC) and 9.7% in Tasmania, where only 17,571 transactions were made.

100,468 locally manufactured cars were sold in 2014, 15.2% fewer than 2013 and now represent less than 10% of the total market. Japan continues to be a key production centre for Australian vehicles and accounts for about a third of vehicles sold in 2014. Thailand, where many of the leading brands have established manufacturing facilities, is a primary hub in Asia for car production and 20% of vehicles sold in Australia in 2014 were built there.

Looking at how different brands have fared, Toyota, accounting for 18.3% of market share and 203,501 sales in 2014, continues to dominate. Holden follows on second place with a 9.5% market share and a total of 106,092 sales. Hyundai and Mazda are battling for third place, Hyundai seeing a year-on-year growth of 3.1% compared with falls of 2.4% and 8.6% for Mazda and Ford respectively.

The new Toyota Corolla and Mazda 3 slugged it out for the bragging rights to be the best-selling model of 2014. The Corolla eventually came out on top with total sales of 43,735, a mere 422 units more than the Mazda 3.

Looking beyond the top 5 selling brands, Jeep deserves a notable mention and is the rising star in the market with a 13.2% increase in sales. Conversely, 2014 has been a disappointing year for Nissan taking a 29% hit on passenger vehicle sales and an overall drop of 14%.

As we are looking to forecast 2015, one thing is clear, it will be an interesting year – many analysts are predicting fuel prices to fall further, thus reducing significantly the running costs of commercial fleets.  In addition, according to CommSec, new car affordability reached a 38-year high in 2014 as car prices dropped, with predictions for prices to fall further. The market for vehicle finance should also receive a boost with interest rates expected to fall in the first half of 2015. All of which signifies a positive outlook for the Australian car market and the underlying fundamentals are likely to remain so for the foreseeable future.

The highly competitive vehicle financing market will be an important area of focus for ACA Research in 2015, when we will be conducting the fourth wave of our Automotive Finance Syndicated study. The 2013 report is also available to purchase at a significantly discounted price, and you can also download a free snaphshot here.

If you'd like to know more about what's happening in the Australian automotive market research space, you can register your interest in the forthcoming 2015 Automotive Finance Insight report by clicking on the button below.

Wishing you a prosperous 2015. 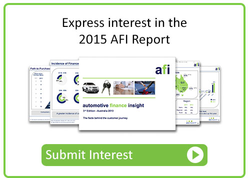