In the last edition of our aged care blog we provided an overview of the aged care reform package and what it could mean for organisations operating in the aged care sector. This time we are exploring some of the population statistics behind the Reform and how the changing profile of Australians may influence how aged care service providers position themselves and communicate their services.

It’s Not Just Teenagers Who Never Move Out

Deregulation of the provision of aged care services has accentuated many of the changes that were already occurring in the aged care sector. With the retirement of the baby boomers, Australia is experiencing a surge in retirees and senior citizens. While those over 65 accounted for 14% of the population in 2011 it is projected to increase to 20% in 2030. But not only is Australia’s population ageing, they are also becoming more likely to stay at home rather than move into aged care facilities.

Along with the increase in those living alone, it has been predicted that over the next 40 years the number of citizens aged 85 years and over accessing aged care services will increase five-fold. The increase coupled with the development of in-home aged care services will create a shift in established aged care facilities to cater for more clients requiring what used to be known as ‘high-care’ as those requiring ‘low-care’ drops off and clients trend towards selecting care at home.

But, what effect will elderly citizens staying in their homes have on the rest of the healthcare system? To ensure that there will be adequate staff to care for the ageing population almost a third of the money the government is putting into the reforms is directed at improving the aged care workforce. More in-home care services will help to keep people in their houses longer and potentially decrease the load on overburdened hospitals, but this may potentially overburden community medical centres instead. It is clear that supporting the needs of ageing Australians will require a change in the structure of communities as well as aged care services. A further set of factors driving change in the aged care sector are the changing social needs of Australia’s ageing population. In particular, the proportion of Australians who state they have no religious affiliation, which has risen from 15.5% in 2001 to 22% at the time of the last census in 2011.

Those with no religious affilication are now almost as numerous as those affiliated to the catholic faith, which, in 2011, stood at 25%.

While these figures may reassure the private aged care groups, it may impact the way in which the 1 in 3 aged care charities and organisations with specific religious affiliations communicate their offer. Some of these organisations may ultimately see merit in repositioning their services to focus more on the ethical underpinning than on an overtly religious message.

With 10% of people 65 years and older identifying themselves as having no religion compared to 50% of those below the age of 30 the question of overt promotion of religious affiliation is likely to be a topic of discussion for some time to come. Whether these numbers are heralding a potentially huge spike in those seeking more secular aged care solutions or simply indicating that religious affiliation can develop as one ages is unclear, but the increasing secularisation of Australians does pose some important questions for aged care businesses going forward.

As well as religious affiliation, the distribution of those requiring aged care services poses another key challenge for the development of aged care services. 40% of those aged 70-74 live outside Australia's capital cities which is in contrast to the 25% of those aged 25-29. What this indicates is that the weight of distribution of aged care services may need to be tweaked to ensure it matches demand, particularly considering that those living in rural settings often have to wait much longer to be admitted to residential care facilities. 26% are placed a month at least a month after being approved as opposed to 52% in the major cities.

Australia's reforms, its ageing and increasingly independent population and its changing social needs have laid down numerous challenges for all aged care organisations. Organisations that can adapt to the changing aged care market will be those that present a strong trustworthy brand.

The opportunity exists for businesses to offer a full continuum of care to meet the varying needs of their clients or to look to move into more niche specialisations such as 'high-care' only offerings. It seems that as we continue to live longer and better we will also be more likely to stay at home. Businesses that run exclusively in-home services should find themselves in a good position as will companies that can effectively cover all modes of aged care from meals on wheels to high care in a facility. Either way the market has become more customer-centric, and as should be the case, the customer is now empowered to dictate the care that would suit them best. Businesses need to be looking further ahead than just the next few years and they should strive to position themselves in the best position for today's slowly changing population but also for the future's radically different one. Now we are living longer and better, what everyone is asking is where and how we want to do that.

If you would like some more insights on public attitudes towards ageing and aged care in Australia please click on the button below to download our free market research snapshot. 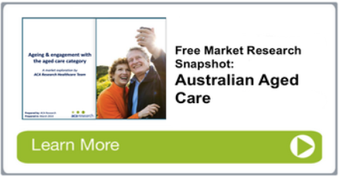 ACA Research has a dedicated healthcare division, experienced in conducting research across a broad range of healthcare professionals and settings. If you are a business decision-maker in the aged care sector and would like to know how you can best meet the changing needs of your potential customer-base, please contact us here to find out how market research can help differentiate you from your competition.