A total of 182,915 new utes were sold in 2013, with the 4x4 segment experiencing a year on year growth rate of 10.9%. More than a half of these yearly sales were to businesses and used primarily for commercial purposes.

This is an important segment of the automotive market, but also one where there has been a lack of hard evidence about the motivations and preferences of commercial ute purchasers. To address this gap, ACA Research recently conducted an in-depth analysis of the behaviour, attitudes and perceptions of decision makers that purchase commercial utes in Australia. 257 organisations operating at least 1 ute were interviewed as part of this study.

A wide range of marques are owned by these organisations, with Toyota and Ford having the highest levels of brand awareness and brand ownership. The Toyota Hilux and Ford Ranger were the most commonly owned models, followed by the Holden Colorado, Mitsubishi Triton and Nissan Navara. Toyota and Ford have a combined 56% of most recent ute purchases.

There are five hygiene factors that fleet buyers take into account when buying a ute:

Other criteria that are seen as important to most are:

The full report, Commercial Ute Insight 2014, is available to purchase from ACA Research. This complements our regular series of reports about the commercial vans market. 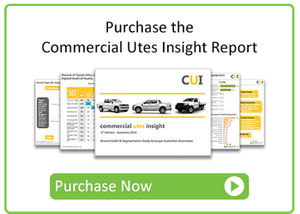