It used to be "too many cooks." Comment on the veterinary unemployment (and under employment) situation

One in five of those surveyed mentioned this spontaneously as a concern and many felt that it was to the detriment of pay and conditions across the industry as a whole:

"So many graduates coming into the profession — pushing down pay and conditions."

The vet oversupply appeared most keenly felt across metro areas and in small animal focused practices, with 70% of those voicing this concern working in or owning a small animal practice.

Conversely, while 17% of vets in mixed (more rural) practices also voiced this concern, a similar number stated that they were actually struggling to recruit vets. This trend echoes general medical graduate statistics with a shortage in rural areas and a glut in cities.

The December 2013 release of the Australian Graduate Survey (GradStats) Report by Graduate Careers Australia backs up this finding.  It reveals that, while employment prospects for Medical Science graduates are better than average (being almost half as likely as other graduates to be seeking full-time employment after 4 months) those studying Veterinary Science fared worse than those undertaking other, similar degrees, with one in five still seeking full-time employment 4 months after graduation.

And the situation is getting worse. A recent article by the Australian Veterinarian Network (Recent stats and graphs of the silent victims: The Unemployed, Dec 18, 2013) reveals that the proportion of Veterinary Science graduates seeking employment has quadrupled over the last 6 years.

While two-thirds of Veterinary science graduates seeking full-time employment are unemployed, a third are underemployed, only able to secure contract or part-time roles. This figure matches the national average (as described in the Australian Bureau of Statistics 2013 6202.0 release)

With one in five practices surveyed predicting gloomy economic times ahead and cat and dog ownership remaining relatively static, is it a case of Veterinary Science graduates being prepared to take on large animal work, or at least to be willing to relocate?

ACA Research will be keeping track of this issue and other challenges facing Veterinary Surgeons and will keep you up to date with new developments and news in this market place. If you are interested in more veterinary market research have a look at our recent blog on pet spending intentions by owners across Australia. Or, you can click on the button below to download our free Veterinary Research snapshot on the challenges facing vets in Australia. 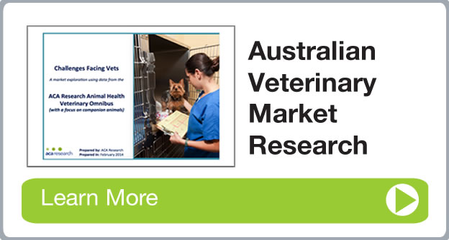