This blog shares some of the key market research insights into the most recognised automotive finance lenders, how brand awareness translates into sales and the success of car manufacturers in selling vehicle finance.

Market research identified that there is a clear divide between the major financial institutions and smaller lenders. Five of the six top lenders mentioned are large finance institutions and banks. The Commonwealth Bank was the most salient lender with 30% of mentions. It was also identified that individuals tend to think of banks as their first choice of finance lender. Esanda and GE Money were the most popular smaller lenders that are top of mind. The only lender associated with a vehicle manufacturer mentioned was Toyota Financial Services. When comparing lender awareness data with the lender that was chosen, it is evident that awareness does not translate into market share. This suggests that although individuals have companies in mind for vehicle financing, they are successfully influenced by other companies during their research process. For example, 30% of respondents listed Commonwealth Bank as one of the first finance lenders that came to mind, even though they only have 11% market share. On the other hand, Eanda scored 8% in awareness and 7% in market share suggesting that their marketing and sales process is converting very well. While major banks have highest market share, the market is also very fragmented, suggesting that smaller lenders have a good opportunity to penetrate the market. Interestingly Toyota, Mercedez-Benz and BMW were the only manufacturer associated lenders that were being used for vehicle finance.

Research showed that the top three dealerships who consistently offered finance to potential customers were: VW (93%), Mercedez-Benz (93%) and Honda (88%). However, offering finance doesn't necessarily turn into deals. The most successful car dealership for vehicle finance is Toyota, followed by Mercedez-Benz and BMW. The manufacturers that have seen strong improvements in the proportion of potential owners offered vehicle finance since 2008 are Toyota, Honda and Volkswagen. If you are interested in learning more click the button below to download a snapshot of our Automotive Finance Insight. Or you can buy the full disocunted report by clicking here. 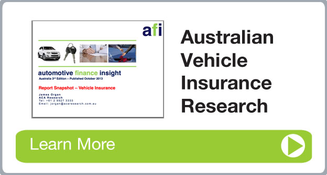 Methodology: ACA Research conducted a total of 802 surveys with consumers who have bought a vehicle using finance costing at least $7,500 since 2009. Research was conducted from the 17th to 29th June 2011.